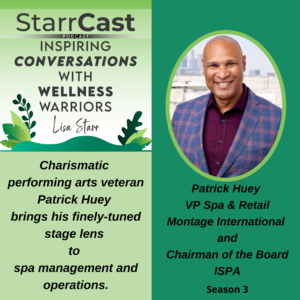 Season 3: From Performing Arts to Spa Management and Operations

A curious nature pointed towards journalism, but Patrick’s creative pathway lay in the performing arts. After Yale School of Drama, Patrick split his time between acting and hospitality, with day spa on the side, both in NY and LA. But after walking through the “open door” of a great opportunity at Four Seasons Westlake Village, he has worked in spa/hospitality ever since, while appreciating the stage aspect to an impactful spa journey. Patrick is now firmly in spa, but has lost none of his stage charisma!

Highlights from a peaceful getaway @forestis.spa @dolomites
What a lovely lunch at a country Inn in Hitchen with my @spabusinessmag colleagues, just missing @jane_kitchn! Thank you all! @elizterry @katieclare2 @meganwhitby
Quite a lovely experience to lead with when clients come through your doors.⠀
I was honored to author and present one of the 2023 @globalwellnesssummit trends, Wellness + Sports. Right up my alley!Thank you to Susie Ellis, @nancyadavis @beth_mcjaggar @cassandra_cav and the entire GWS team https://www.globalwellnesssummit.com/wellness-sports-new-business-models-for-hospitality/
Can't beat the views from the expansive, and warm, oudoor pools at the amazing @qcspa on Governors Island. Fun with #spa colleagues!
The Path to Becoming a Successful Spa Consultant and Designer

Becoming a Strategic Global Advisor in the Spa, Wellness and Tourism Sector...
Scroll to top