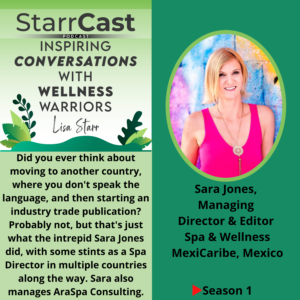 The intrepid Sara Jones joins Lisa Starr to discuss her career path from spa director to magazine publisher, collecting countries as she goes.

Did you ever think about moving to another country, where you don’t speak the language, and then starting an industry trade publication? Probably not, but that’s just what the intrepid Sara Jones did, with some stints as a Spa Director in multiple countries along the way. Sara also manages AraSpa Consulting.

Highlights from a peaceful getaway @forestis.spa @dolomites
What a lovely lunch at a country Inn in Hitchen with my @spabusinessmag colleagues, just missing @jane_kitchn! Thank you all! @elizterry @katieclare2 @meganwhitby
Quite a lovely experience to lead with when clients come through your doors.⠀
I was honored to author and present one of the 2023 @globalwellnesssummit trends, Wellness + Sports. Right up my alley!Thank you to Susie Ellis, @nancyadavis @beth_mcjaggar @cassandra_cav and the entire GWS team https://www.globalwellnesssummit.com/wellness-sports-new-business-models-for-hospitality/
Can't beat the views from the expansive, and warm, oudoor pools at the amazing @qcspa on Governors Island. Fun with #spa colleagues!
English Barrister to Bush Hospitality Executive

Spa Industry Leader and Pioneer in Wellness
Scroll to top