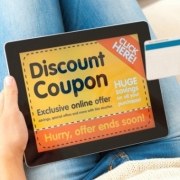 Is social media now just about bargain-hunting–sharing discounts, steals and deals with your friends? We know from past studies that discounts do not lead to loyalty. They lead to the expectation of more discounts. Which means, that shiny new customer will linger only if you can undersell your competition. Where’s the so-called wisdom of crowds? It appears to be circling the discount drain.

When it comes to saving money, the wisdom of crowds looks more like the mojo of mobs. To those of us who have enjoyed being “value add” artistes, creating differentiated experiences for discerning guests, the whole thing just looks like a hideous tag sale. High overhead businesses are being thrown onto the bus alongside their bargain basement counterparts, heading down the road to dusty, hardscrabble Camp Discount. The only activity at this camp is a pitiless game called “How Low Will You Go.”

Pitiless, because the companies who are inflicting this torment on us bricks-and-mortar fatties are internet marketing creatures. They have sweaty crushes on their “users” but throw spitballs at the very businesses that are providing the value that endears the users to them. They also have an unfortunate tendency to tell businesses what’s good for them, as if they actually know. And it’s a word I’ve heard a lot: “Exposure.” As I like to say, you can die of exposure.

“It’s your job to retain them,” discounters tell you. Gosh, your only challenge is to make them happy, and they’ll gratefully morph into a loyal, full-price client. Riiiiiight. And the next month, there’s your competitor on Groupon, with a deeply discounted offer. But, if we’ve done our job right, they’ll stick with us. Riiiiight.

The discountante lives for deals. She doesn’t want to bond with your business. She wants to flit from flower to flower, yelping the entire time. Remember, these are the kids who grew up with the concept of “friends with benefits.” Commitment isn’t in their DNA.

But consumers are not the only group out there with some clout. Small businesses scored a victory this week against a user-worshipping company that’s been easy to hate. That’s right, Yelp was squirming this morning as the hot breath of a lawsuit by businesses tickled its backside. They were accused of manipulating ratings based on whether a business advertised with them or not. Frankly, I don’t think Yelp was misbehaving, but I think it underestimated the venomous hatred they’ve inspired in legions of small business owners.

Yelp announced that we’ll be able to see those positive reviews they deem so un-Yelplike (the one-off rave that your client wrote, just for you, which in the past would disappear after about 90 days.) They’ll just be hidden away in a little basket labeled, more or less, “suspect.” Yelp has been trying to walk a very fine line, torn between appearing to pander to users while attempting to convince businesses to give them advertising revenue.

You’ve probably noticed, Yelp has made more and more of their business services free, a positive step that has helped many businesses make peace with them. If you’re not using these free tools, you’re really missing out. And whether you like them or not, Yelp is boosting your search rankings thanks to their their heavily trafficked site. (I know, I know, you almost picture yourself standing there while you’re being slapped across the face, mumbling, “Thank you sir, may I have another?”)

Fitting right in with the current mania for vampire chic, discounters like Groupon and their ilk are feeding off spas’ desperation to fill their schedules. They’re causing quite a stir, but in this case “stir” may just be another word for “churn.” I’d love to hear from spas who have been able to attract and retain guests using this type of program. Please contact me lstarr@wynnebusiness.com and share your stories.

Our experience with Spa Week at our own spa suggested that the folks who jumped on this promotion were, by and large, geographically unqualified to be regular spa guests. A year later, not one guest who came to us through this promotion was retained. And a couple of the little darlings left us unpleasant souvenirs in the form of snarky Yelp reviews. (Cheap and ungrateful–a winning combination.)

Compared to our normal retention rate of over 30%, this was a glaring example of the destructive nature of D-bombing. Aggressive promotions can create volume, but that volume may simply be churn: money-losing “volume” that saps your customer service resources and puts your regular guests in the back seat.

The jury is still out on Spa Finder Deal Days, until we see the 90 day retention statistics. Even Spa Finder feels compelled to embrace the discount mindset, but they promised a more retention-oriented promotion. I’m not sure how they engineered this, but time will tell if they hit the sweet spot. Participating in the heavily-discounted Deal Days while not accepting Spa Finder gift cards for the promotion, alas, created some pretty awkward moments with customers for many of us. We’re not sure how Spa Finder could rectify this in the future. We had much lower turnout than with Spa Week, but hopefully they were higher quality guests. Time will tell.

I haven’t written off Groupon yet, but I can tell you after two-plus decades in business, I’m dubious about their claims. They’ve graciously offered to put me in touch with some spas that have been happy with their results. I look forward to seeing the retention numbers and reporting back to you!

@global_wellness_institute ⠀
From our family to yours, we wish you a peaceful and blessed thanksgiving. ⠀
#Emotion is a significant force, and a most effective tool, in achieving total wellness of clients’ bodies and minds—and a spa’s bottom line.⠀
Turning previously unused basement space into engaging #spa treatment areas, kudos to @wellnessspotatl
Fascinating #spa & #wellness #tool which helps clients to improve #mental #function, as well as providing an additional experience option for guests. Spa professionals will love.⠀
#reiki: one of the few healing arts that works to #balance the entire person—the #physical, #emotional, #mental and #spiritual aspects of each individual. ⠀
Scroll to top